My art is the visual language of the soul, the heart. It is the transformation of a thought that takes form in an image, color or line.

The answers come together to become the transformation of a thought.

I once worked with an elderly lady named Mrs. K. Doolin. She said, “you make things dance.” I guess there is no better way to explain my art.

A Conversation About Art from an Artist Entitled…

Viola Delgado — An imaginative artist, painter, and sculptor who is driven by an incredible passion for self-expression through art.

As a studio artist, her work has been exhibited in Dallas/Ft. Worth metroplex and throughout the State of Texas, including a 30-year retrospective exhibit at the Dallas Latino Cultural Center. In addition, her work has been shown in New York City and internationally in Munich, Germany; Prague, Czech Republic and Torreón, Mexico.

Her public works can be observed at the DFW International Airport Terminal D, Gate 8, as well as the Lake June and Rowlett Dallas Area Rapid Transit (DART) Stations.  The Rowlett Station has the most art of any other station in the Dallas Area Rapid Transit system. Her sculpture, “The Garden,” is currently displayed at the Dallas Latino Cultural Center.

Many of her works are in private collections in Texas, Colorado, Indiana, New York, Canada and Mexico.

Viola attended the Art League School in Alexandria, VA and Dallas Baptist University in Dallas, Texas with a major in psychology. She was born in Sinton, Texas and resides in Dallas, Texas.

Why No Human Faces?

The face expresses emotion and I like the viewer to associate themselves with the image with their own interpretation.

I don’t paint the faces because it allows the viewer to relate more to the painting. They can imagine or be reminded of someone they know.

My brain and thoughts are like a ticker tape, they run endlessly.

Most of my artwork is designed in my head first. I actually think of all that goes into the artwork, every line, color, movement, the whole design, so by the time I go to my surface it’s 90% completed.

The women in my paintings represent different periods in my life, my ancestors, my dreams and women I have known.

The long skirts, braids and color are part of my Mexican heritage, but also tell the story of women who are respectful, solid, strong and unbroken. These women, much like my mother, created strong families built upon faith and love.

“I’m proud of most of my work because it takes so much out of me emotionally to create that it’s a miracle that they get finished.” — Viola Delgado

Driven by an
incredible passion for self-expression
through art. 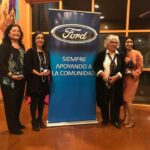 We are always delighted to work with individuals and organizations to turn their ideas into art they can enjoy forever. Plus we have existing pieces for sale.